I haven’t used it in years. Still, it lives on. 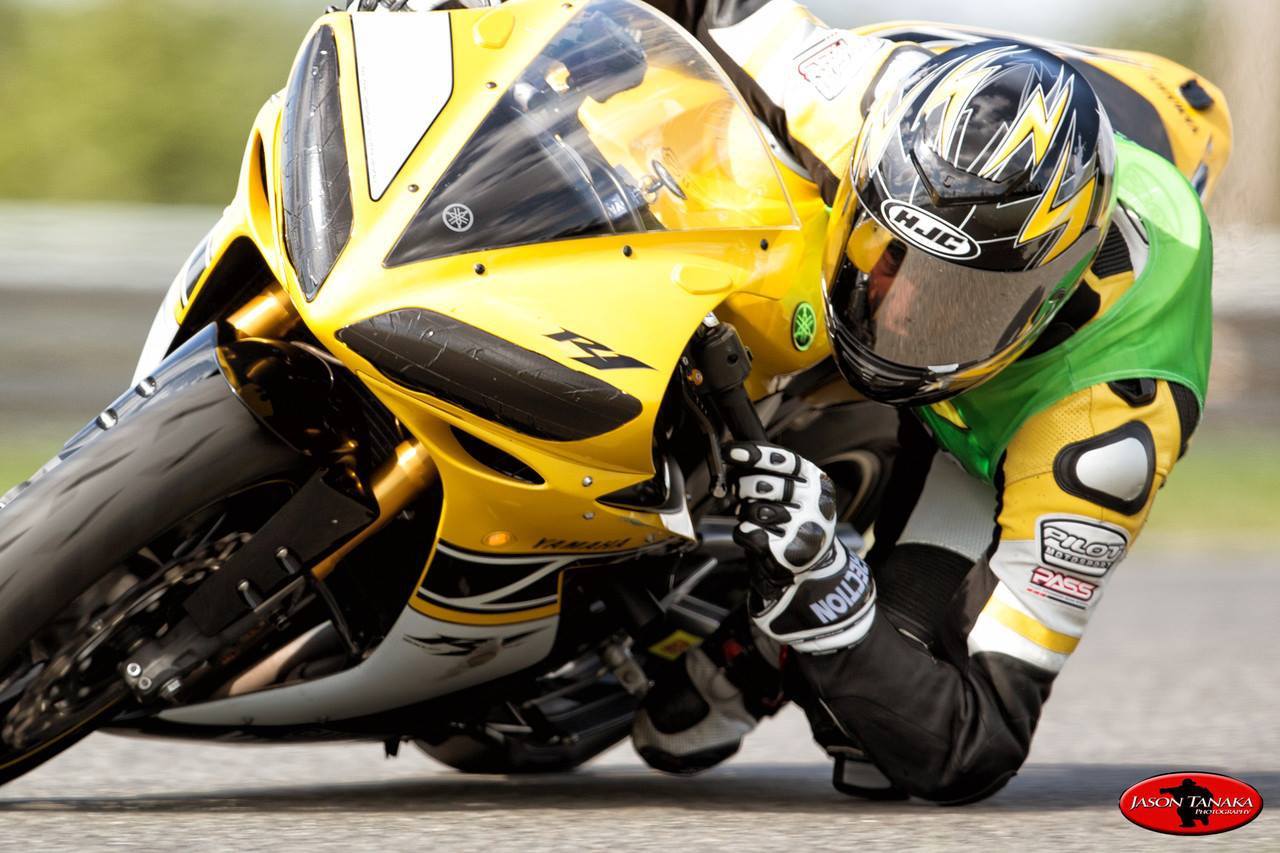 Well it seems I’ve been reduced to annual updates here at ChrissyOne.com. I’ve been concentrating on other things lately so blog updates have been sparse. But in the spirit of my last post, here’s an update from the track.
This image was shot this past Saturday, April 12 2014. That’s one day short of two years since I started this ride. This season, I’ve been hired by 2-Fast, the track-day company I’ve been riding with these past two years, and I’ve having even more fun than ever. Happy riding, and I’ll see you at the track!!

Today, April 13th, I celebrate one year since I started riding track days.

I’ve been riding motorcycles for almost 30 years. My first bike was an orange 1979 Suzuki DS 80 that I got when I was 10. For most of the past couple of decades I’ve been riding heavy cruisers and touring bikes, but two years ago I bought a Yamaha FJR to ride to work. It’s a bike that fundamentally changed my riding – by far the sportiest bike I’d owned, it was always teasing more speed out of me. I pushed it harder into corners and generally rode it much more aggressively than those big road hogs. I was riding it less like I rode a motorcycle and more like I rode my mountain bikes – more body language and a much closer connection with what the bike was doing. This bike was teaching me things.

About the same time, I made a few friends in the racing scene, and they began encouraging me to come to the track. This was something I’d thought about doing for a long time, but it wasn’t until events conspired in several unlikely ways that I finally found myself sitting in pit lane on that cold April morning, waiting to take my first lap at The Ridge Motorsports Park. I had enrolled in 2-Fast’s Performance Riding School to get acquainted with the process and learn some new skills. I was a little nervous at first, and worried about crashing, messing up my pretty bike, or just looking stupid in front of a grid full of (I thought) bad-ass racers. But as soon as we were up to speed I forgot all that. Fear and uncertainty melted away as I got the tires warmed up on my FJR and fell into the funnest experience I’ve ever had in my life. It was about half way through that first session, as I came around Turn 6 the third time, I felt my right foot lift off the peg and hang there as I pressed the bike hard into the left-hander. I looked up and saw Mt. Rainier gleaming in the gorgeous morning light, and had a premonition that my life was about to change forever. “Okay, so *this* is what the rest of my life is going to be about.”

The day wore on and I wore out, but I wasn’t too tired for another session, right until the end of the day, when I packed up and shared a few beers with the new friends I’d made. Far from being exclusionary, the ‘bad ass racers’ I met were kind and eager to help me learn the ropes and give me advice on how to improve. I was already hooked when I looked at the ground-down foot pegs on my big sport-tourer and said to myself – “I think I’m gonna need an R1” – which I bought a few weeks later. My priorities suddenly shifted, but even then, I had no idea how this day would change my life.

The first image below is from that day. It seems like a million years ago now, and it’s hard to believe the bottom image was taken less than a year later – just two weeks ago – in almost the exact same spot. In that year I’ve made countless new friends, pushed myself out of my comfort zone, and become a better rider than I ever thought I could be.

Thank you to 2-Fast, to The Ridge, and to all my friends for welcoming me into this wonderful world. Here’s to the first year of the rest of my life. 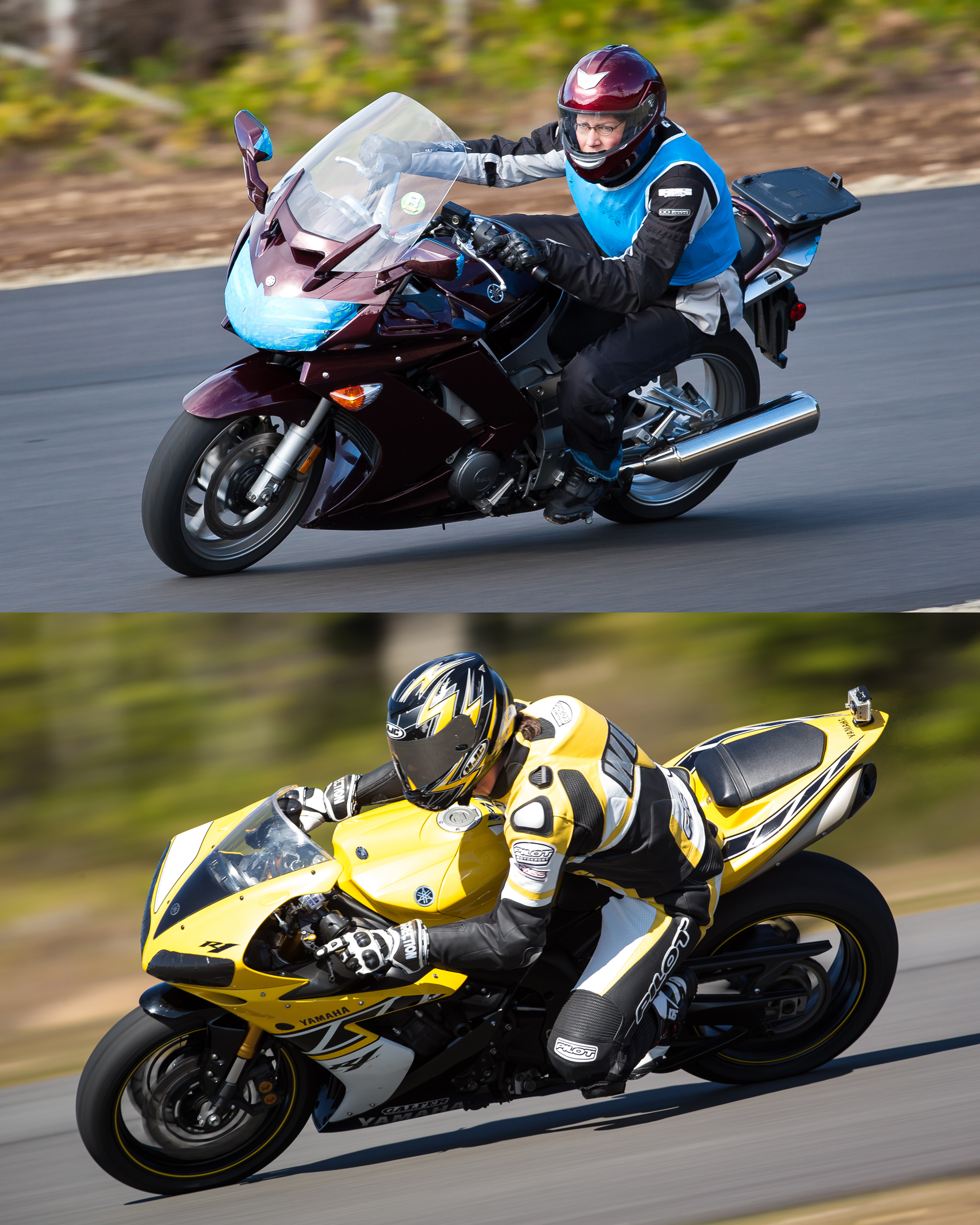 I just hung three of my large Seattle prints at Whiskey Gulch Coffee in Port Orchard. Stop by and have a look!

All three images will be signed an numbered editions of ten each. If you’re interested in purchasing, drop me a line – chrissy.wiley at gmail.

Since losing interest in Flickr a few years ago, I’ve been publishing most of my images on Facebook. That’s a great way to get Likes from friends and acquaintances, but not a very far-reaching way to get my work seen. So I’ve opened an account with 500px. They not only have a beautiful interface for showing photos, but they have some amazingly talented photographers that show some gorgeous content. I’m going over my catalog and selecting some of my best work to show there. Have a look!

A friend and co-worker asked me to test out the Mamiya 645 AFD he recently acquired. I’ve been shooting with it for about a week, and today I was blessed with good weather, beautiful light, and a whole day to play. Here are some of the images I made…

I made this image at one of my morning coffee stops in Port Orchard, Washington. 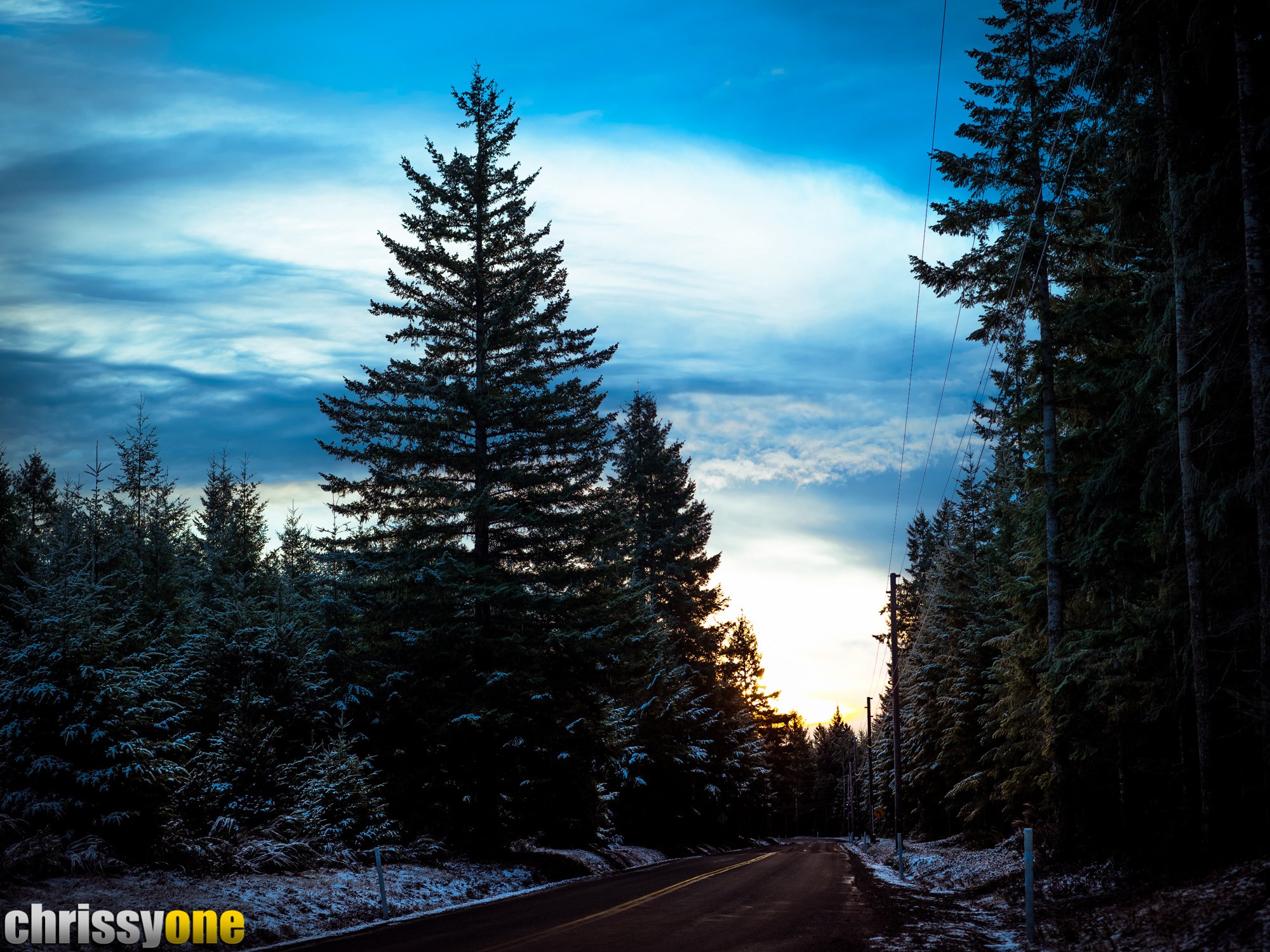 This is a shot of the morning sun on Sand Hill Road in Belfair. It was a very cold morning… 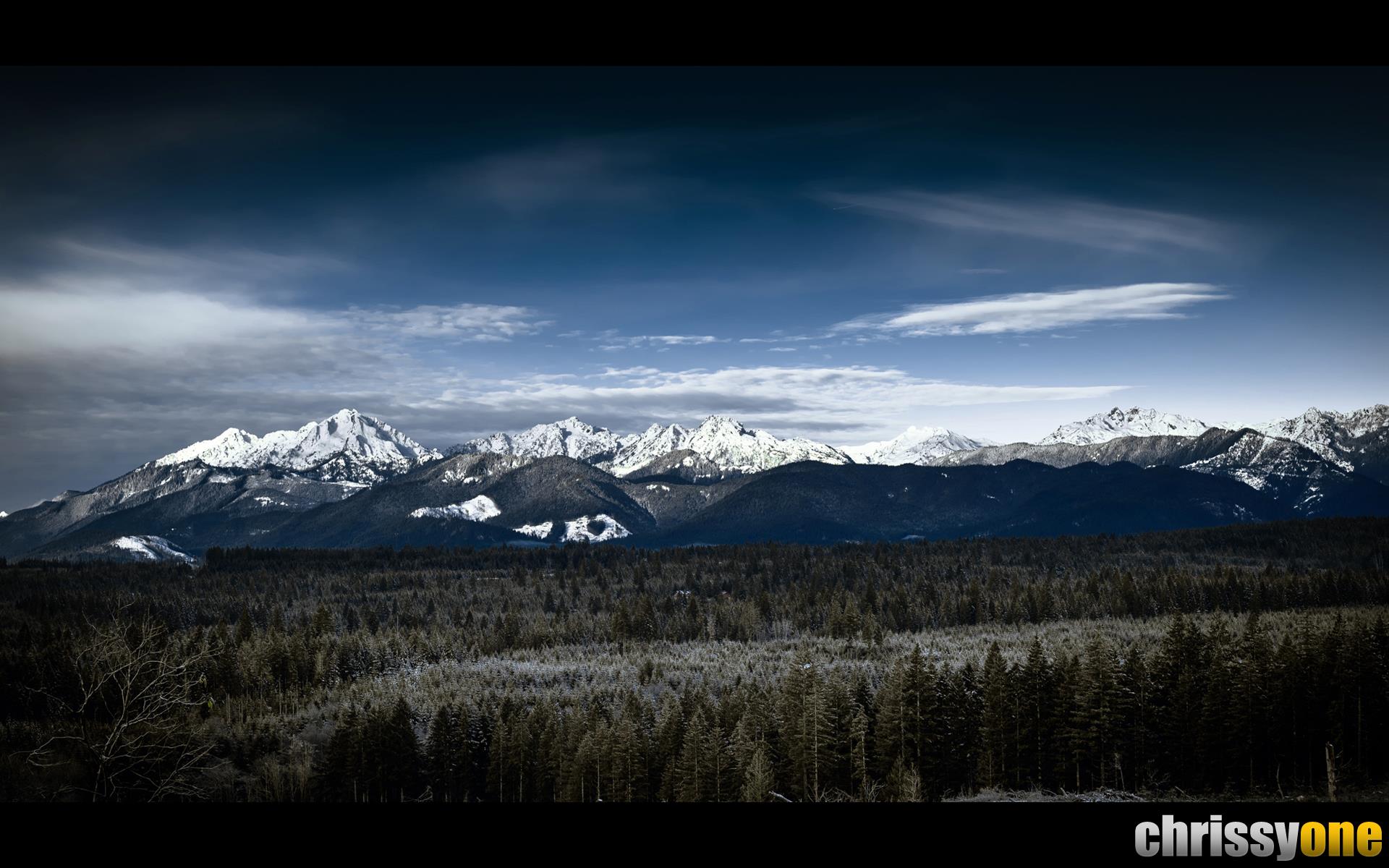 This is an image of the Olympic Mountains, as seen from Dewatto Road on the Tahuya peninsula. After following an old box truck for what seemed like a hundred miles through the ice and snow, I finally found a spot with an excellent view.

At the end of the day I decided to drive to Seattle for one last shot. I’ve been to this spot before, but not for a good 20 years, and never with this kind of hardware. My fingers and ears stung as I stood there in the freezing January cold for about 90 minutes, waiting for the light to be right.

UPDATE: The next day, the camera was still haunting me, so I went back to the city again. This time, the mission was to capture the ‘classic’ view of Seattle from Kerry Park on Queen Anne Hill. In my whole life I’d never made this image, so I thought it was about time.

The redesigned version of AmazonLocal’s iOS app is live on the app store! Why is this a big deal? Well, in addition to providing iOS users with a place to view, purchase, and organize deal vouchers, the app has been completely re-designed with a cleaner look and a new splash screen. The splash image was shot by me, with the help of several brave AmazonLocal volunteers that were willing to show up at 6 AM on a chilly Seattle morning. (here’s a quick writeup on AppAdvice) 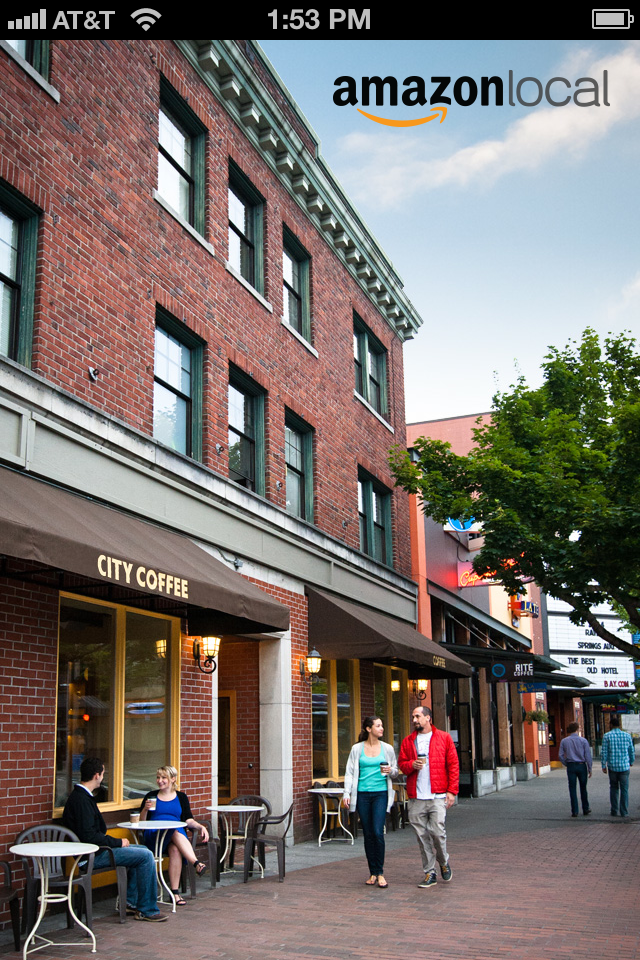 Kudos to Sara Thompson (seated, in blue) for the redesign work, Veronica Velasco for providing on-set support and talent wrangling, and all our models for volunteering to help us out.

REVIEWS
“The Mobile app is driving subscriptions to the deal site.”
“Looks good and moves fast. Much easier to see all offers in my area.”
“Simply beautiful. Easy to use.”
“Responsive and beautiful app.”
“Works great! Makes me want to buy deals!”
“Easy to use! And looks great.”

This is a full session at The Ridge, around the 2:00 hour… Well, most of a session anyway. The fuel light came on during the session, then proceeded through various stages of blinking to what could only be called Angry. So I cut it a couple laps short and came in to beg for more gas. I chose this session to publish mostly because it was by far the best light. Things don’t really get going until the tires warm up around 3:45. I recorded what I believe to be my fastest lap time so far at 2:11. Enjoy!

It’s funny how photographers are so quick to jump to one side – always about equipment, but in different directions.
If someone mentions using a 1Ds – then it’s not the camera, it’s the photographer. “I can make the same images on my (whatever cheaper model they currently own)”.
If they state that they only used an iPhone, then it’s a nice toy, but not a professional choice.
People just get so hung up on the tools, and which is better, and which aren’t worthy – like a mechanic would only ever carry one wrench around. Photography is a unique situation every time it happens. The Best Camera for each situation depends on how much you can adapt to the box and how much the box can adapt to you. There is not one solution yet.

You can adapt to the box – carry around a bag of yummy interchangeable goodness (or better yet, get an assistant to), hang a heavy thing around your neck, and make people run for cover. The tradeoff? Supreme image quality, fast, precise autofocus, compositional freedom.

Or the box can adapt to you – it’s with you probably every moment. It’s attached to the internet and can publish photos with minimal time and effort. It has lots of custom processing treatments that can be applied on the fly. It does not attract attention because almost everyone has one. The tradeoff? Lower image quality, limited focal length options, slower performance.

You will experience situations in photography where one of these factors is more important or more limiting than the other. A product shot demands high quality, but a news event demands timeliness. Any one tool you find will have limitations as well as strengths in a given situation. A good photographer can predict which will do the job better, and be in the right place when the photons bounce their way. Once the image is made, how it got there is mostly irrelevant.